The Foundation of the Geneva Watchmaking Grand Prix (GPHG) is holding its annual prize-giving ceremony in Geneva on November 12.

This year, two leaders of the Acrotec group have been selected as members of the jury for this long-awaited competition.

Elisabeth Saulcy is the current Director of Electroplating at STS La Chaux-de-Fonds and STS Meyrin. Elisabeth began her career in the eyewear industry in Paris before joining Audemars Piguet, where she discovered the world of watchmaking.

Hubert Lorenz is the founder of the Mimotec company in Sion. This Valaisan graduated in microengineering from the EPFL in 1992. In the same year, he joined the Institute of Microengineering at the same school, and in 1994 he began a doctorate in the field of micromechanism manufacturing.

From 1995, he worked with researchers from IBM in Zurich on the development and characterization of a thick photoresist called SU8. This work radically changed the direction of his doctoral thesis. The new substance enabled him to manufacture plastic injection micromoulds of a previously unheard-of complexity, and it aroused great interest in both the scientific and economic worlds.

Here are a few questions we wanted to ask them before the Grand Prix.

– How do you see your role?

ES: “I was honoured to be selected this year. I know the GPHG well, having been there as a spectator for many years. Now it’s up to me to give my opinion. What a pleasure! I will know to remain impartial and neutral towards the different brands represented.”

HL: “The GPHG and its awards are the Oscars of watchmaking; the prizewinners receive great recognition from the watchmaking community. The visibility created by this event is almost worldwide, so it is clear to me that the awarding of the prizes must be carried out in a thoughtful, professional and consensual manner with the rest of the jury.

The role of the jury during this period of Covid is all the more important because the public isn’t going to shops as much, so the brands are using all available means to publicize their new models.”

– To which selection criteria will you attach particular importance?

ES: “First of all, I am passionate about watches on a personal level. From a professional point of view, I am responsible for two subcontracting companies that work directly with watch manufacturers. I will therefore focus my attention on the “watch motor”.

Moreover, I remain a woman who is operating in a largely masculine world and, contrary to what one might expect from me, aesthetics will play a secondary role in my choices.”

HL: “As a supplier of motion components and having a broad knowledge of the different “motorization” of the market, I will try to make the other jurors pay attention to the manufacturing quality of the interior of the watches being presented. As we often say in watchmaking, “The essential is invisible.” The general aesthetics of the movement and the quality of its integration into the case are also of great importance in my opinion.

Finally, the general aspect of the product and the balance of the hands, the dial, the case and the bracelet will contribute my final score.”

And to the question: Do you have any other messages you would like to get across before the contest?

They both replied, “May the best win!”

To watch the Grand Prix:

We invite you to join us online to share this rare moment of celebration of watchmaking excellence, led by Edouard Baer, on Thursday, November 12 at 6:30 pm, live on gphg.org, euronews.com and the sites of our specialized media partners, as well as on Léman Bleu. 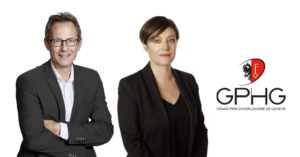 The Acrotec Group is a team of entrepreneurs and talents with a single ambition: to continuously push the boundaries of precision micromechanics and everything associated with it. Acrotecs objective is to better serve its customers, to gain their trust and to earn their loyalty.

Acrotec is the leading independent supplier of mechanical movement components to the Swiss watch industry. The products offered by the Acrotec Group include most of the key components of a watch movement, including shock absorbers, oscillating weights and barrel springs, and also escapements, barrels, the index-assembly, and many other components and assembled parts. Acrotec also offers automated machining, tools, and all specific treatments and finishings.

Acrotec is one of the leading contract manufacturers in the MedTech sector in Europe. The group is active in the manufacture of complex components and subassemblies for medical devices, as well as precision pumps used in dialysis and diagnostics. In addition, it is a trusted partner in the production of spinal, extremity, maxillofacial, cardiovascular and dental implants, as well as in most instruments used in surgical procedures.

With its large production capacity and mastery of production processes in accordance with ISO9001, IATF and EN9100 certifications, Acrotec supplies a wide range of demanding industrial sectors. The groups strong technical expertise combined with the vertical integration of many production processes offers a qualitative and competitive service to our partners.
Visit Acrotec website

The Acrotec Group is a team of entrepreneurs and talents with a single ambition: to continuously push the boundaries of precision micromechanics and everything associated with it. Acrotecs objective is to better serve its customers, to gain their trust and to earn their loyalty.